The Cryptocurrency market has shown a positive trend today, July 4th, with Coin 360 reporting that Bitcoin was trading higher than normal. Apart from Bitcoin, most of the top altcoins have shown minor gains after a long period of falling figures.

As reported by Coin360, Bitcoin is trading at $6732 – 3% above the normal for this 24-hour period. The uptick for Bitcoin started on June 30 and has been rising since then to comfortable remain clear of the $6300 resistance mark. 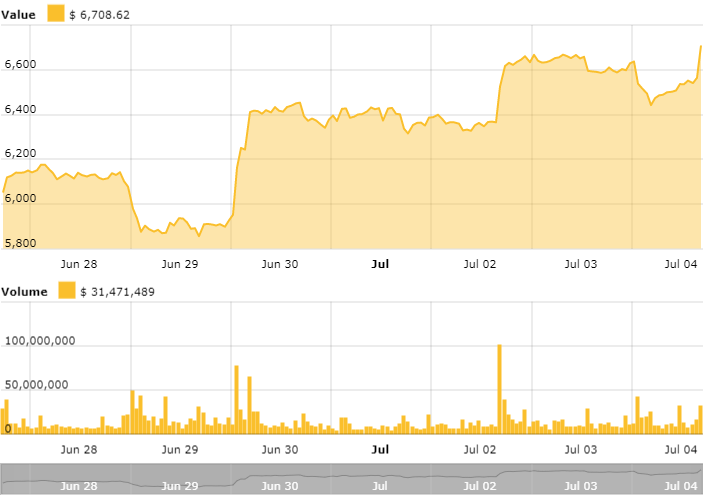 Bitcoin is accompanied by the top altcoin, Ethereum, which is trading 2% higher over the last 24-hour period – at $477 at press time. Ethereum’s weekly high went up to $483, 8% higher in the 7-day interval. 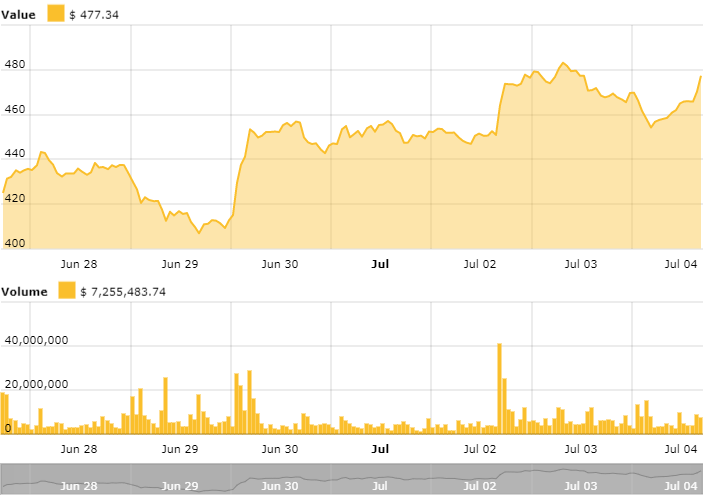 Top ten altcoins according to CMC’s charts today, were majorly trading positive, except Cardano (ADA) showing red – down by 1% over the 24 hours and trading at $0.158 to press time.

Total market capitalization of all cryptocurrencies from Coinmarketcap

Now that the markets enter July with late June rebounds, it will take more than recoveries to respond against security threats on the trading channels.

Binance, which has traded around $1.5 billion in the last 24 hours, has resumed its services after a temporary suspension in light of the irregular pattern of Syscoin (SYS) trades.

While Binance hasn’t disclosed exact details, the altcoin seemed to have been trading at a staggering 96 BTC during the incident. Binance said that they have now stopped all the irregular trades and has taken additional measures for their user’s recovery.

The United Kingdom, in the meanwhile, has encouraged the use of blockchain in their ecosystem “to enable social freedom, to increase efficiency, and to rebuild societal trust.”

Bitcoin Breaches $3,900 With $4,000 Mark In Site As Other Cryptos Too Register Immensely Satisfying Gains